Farmworker Organizations Encourage Full and Effective Implementation of the WPS

In October 2016, farmworker-serving organizations from across the U.S. submitted a letter to the National Environmental Justice Advisory Council (NEJAC) encouraging a robust implementation and enforcement of the 2015 revised Agricultural Worker Protection Standard (WPS). The NEJAC serves to advise and provide recommendations to the EPA about issues related to environmental justice in the United States. The letter commended the EPA on passing strengthened regulations to protect farmworkers from exposure to toxic pesticides and offered several recommendations to ensure they are fully and effectively implemented.

The Associated Press published an article highlighting failures in the U.S. pesticide safety inspection and reporting system. The article uses several recent pesticide exposure incidents involving farmworkers as examples of the widespread failure to enforce federal regulations. The Worker Protection Standard, which has been recently updated and revised, is designed to protect workers from exposure to pesticides used in the environments where they work; however, enforcement of these safety regulations pales in comparison to the enforcement of safety regulations in other industries.

A crew of workers on a farm owned by the Syngenta Corporation in Kauai, Hawaii, entered a corn field sprayed with chlorpyrifos before the required 24-hour waiting period. Of the farmworkers who entered the field, 10 were transported to the hospital and three required medical care overnight.

This recent incident of pesticide exposure highlights the importance of federal regulations that protect workers from pesticides. The Worker Protection Standard, which was recently revised and updated, includes requirements that agricultural operations clearly mark and communicate to workers when pesticides have been applied to fields, provide training to workers about pesticide safety and workers’ rights when working around pesticides, and transportation to medical services when workers have been exposed to pesticides.

The new WPS establishes a minimum age of 18 for pesticide handlers; increases the frequency of worker safety training from once every five years to every year; improves the content and quality of worker safety trainings; provides new rules on decontamination and personal protective equipment; and improves the quality of information that workers receive about the pesticides that have been applied at their workplace.

The amended WPS includes new provisions to protect farmworkers and pesticide applicators from exposure to pesticides.“These changes are an important step in the right direction and will help protect the health of farmworkers and their families from pesticide overexposure,” noted Amy K. Liebman, MPA, MA, Director of Environmental and Occupational Health for Migrant Clinicians Network.

While we celebrate the success of the new WPS, we are disappointed that medical monitoring and onsite facilities for showering and changing out of work clothes were not included. Our coalition continues the WPS campaign by advocating for the best implementation and enforcement plans possible. Even the best regulations are not adequate without effective implementation and strong enforcement.

It has taken more than 20 years for the Worker Protection Standard to be updated and revised, but farmworkers, advocates, health providers and residents of rural communities hope that EPA’s improved rule leads to real improvements in workplace safety for agricultural workers.

The November 2015 edition of New Solutions, a peer-reviewed journal focused on the intersection of health, work, and the environment, included an important article that presented the voice of farmworkers in the process of creating federal regulation. After more than 20 years, in March, 2014, the Environmental Protection Agency proposed revisions to the Worker Protection Standard, which is the federal regulation that outlines the safety requirements for pesticide use by agricultural employers. The proposed revisions were posted in the Federal Register and made available for public comment. Farmworker organizations reached out to farmworkers and documented their experiences with pesticide exposure and safety. Firsthand accounts were submitted to the EPA as public comments, which informed the final revisions of the WPS. Through this process, farmworkers made their voices heard and advocated for changes to improve their health and safety.

Find the article here: “Farmworkers Make Their Voices Heard in the Call for Stronger Protections from Pesticides.” (Subscription required for full text)

Watch this short film on the pesticide exposure experienced by the farmworkers of Lake Apopka, Florida. It was directed by Sanjay Rawal, who also directed the widely popular and influential film, Food Chains.

In honor and commemoration of Cesar Chavez’s birthday on March 31, 2015 we delivered a national petition with over 21,000 signatures to the Environmental Protection Agency demanding that the agency not delay any longer in issuing a stronger Worker Protection Standard (WPS) to better protect farmworkers from occupational exposure to pesticides.

Thanks to Pesticide Action Network and United Farm Workers  for hosting the online petition, and thanks to Farmworker Justice, Earthjustice, the Labor Council for Latin American Advancement (LCLAA), and the National Hispanic Leadership Agenda for delivering the petition to the EPA and for representing the other organizations in the coalition who could not be in D.C. in person. 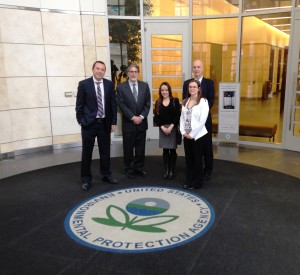